I love seeing new developments in the AR-15 market that seeks to enhance reliability of the platform. New technologies come out it seems yearly now, promising anything from small improvements to God-like perfection. But do the claims hold water? Well, I am more of a middle man when it comes to new technologies. I am initially skeptical, but hopeful. One of these new promising technologies is a Nickel-Boron coating that lines the entire carrier (and sometimes bolt). The manufacturers, and there are now many, claim the lubricity rate of the coating is such that you often dont even need lubrication! I dont think I would ever take it that far….I’m sorry, but metal on metal contact requires lubrication, or you have premature wear and/or failure. That much is a simple fact. However, I remain open to the idea of a “less-lubricated” bolt. If a BCG (bolt carrier group) can go longer without requiring lubrication before failure, then that is a positive development. The fact is, Direct Impingement AR-15’s, that is AR’s that have the milspec gas tube where the gas is pushed into the gas key of the carrier and thus pushes the carrier backwards and spits out the hot carbon filled gas both outside the side holes of the carrier and also into the upper receiver, are very dirty running rifles. Cleaning is, in my humble opinion, absolutely necessary as I dont want my AR looking like the BCM Filthy 14.

So in comes the Nickel-Boron coated BCG’s…..the supposed “answer to the problem of dirty and dry AR-15’s”. The specific specimen that I was able to get my hands on during these extremely lean times is a Joebob Outfitters Enhnanced Nickel Boron BCG. The BCG, (bolt, carrier, gas key and cam pin) are coated by WMD, the guys who were originally at FailZero and left and started WMD. Joebob’s also sells straight WMD X-bolt BCG’s, however they do not come with the enhancements: MPI tested and roll-marked bolts, nickel-boron coated bolts, upgraded McFarland gas rings (less leakage of gas), S7 steel extractor heat treated to 48-53 rockwell and also nickel-boron coated, KNS Perma Pin, and chrome silicon extractor spring and black o-ring for more reliable extraction. I must say, when I saw that all these upgrades were included for the same price (or cheaper!) than other competing brands, I was very impressed. Most expensive brands will have all of the testing specs completed, like Daniel Defense, BCM, LMT, etc. But this one had all of those specs (except HPT [High Pressure Test]…..more on that below) PLUS all of the other random upgrades that nobody else includes. Pretty sweet deal. 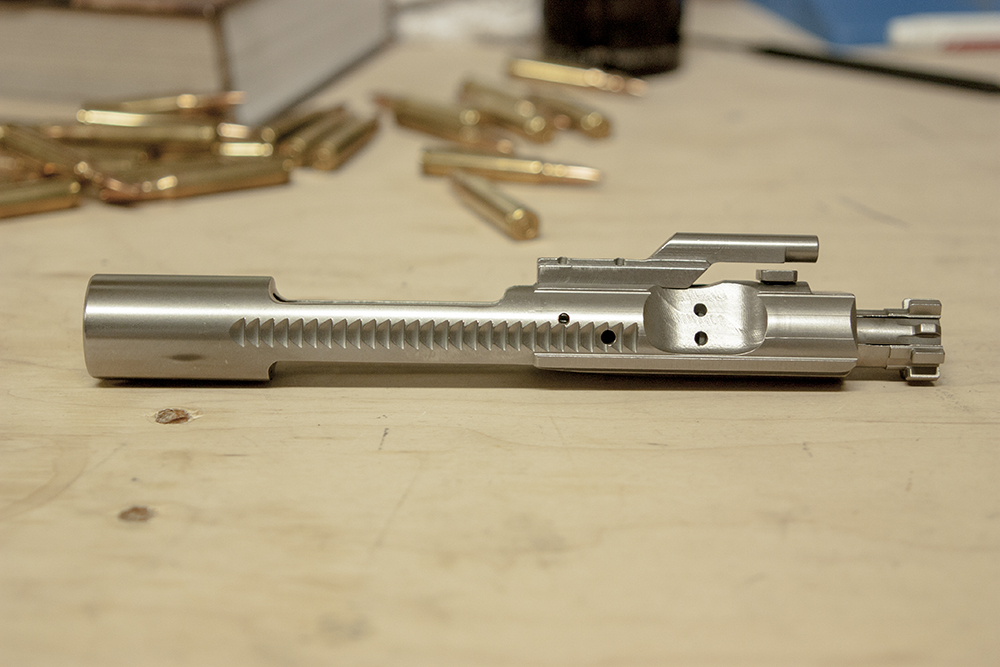 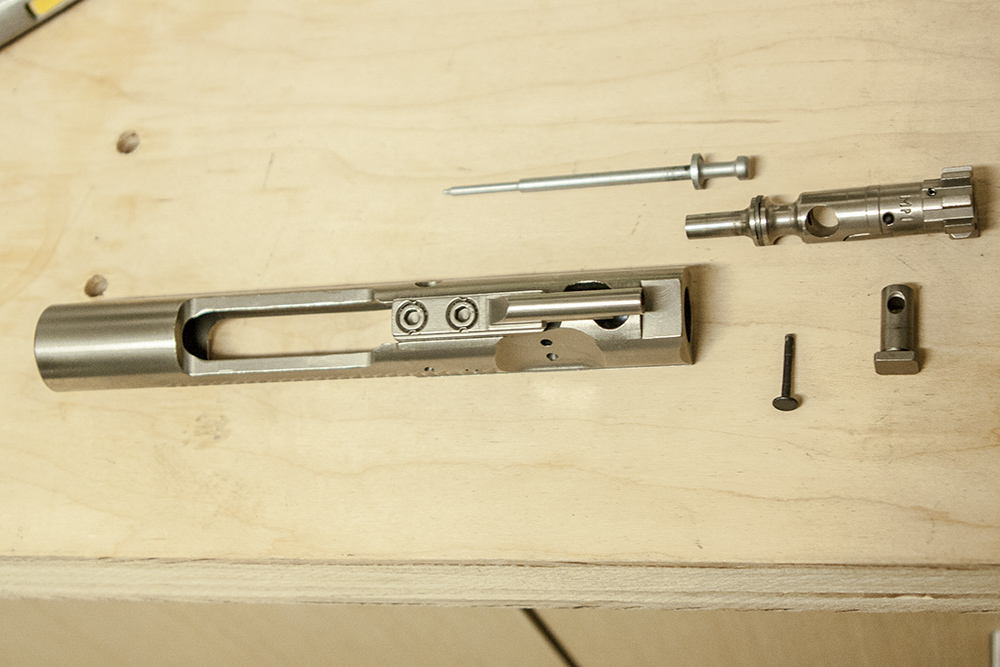 Upon first inspection, I immediately noticed some things that made it stand out from the crowd:

1) It has an incredible build quality. Edges are smooth, no rough spots, completely coated inside and out.
2) It feels incredibly smooth and slick.
3) Gas Key has very accurate and deliberate stake marks.
4) Even before being fired or broken in, the bolt slides back and forth without effort. The movement feels like a BCG that has shot 1000 rounds. 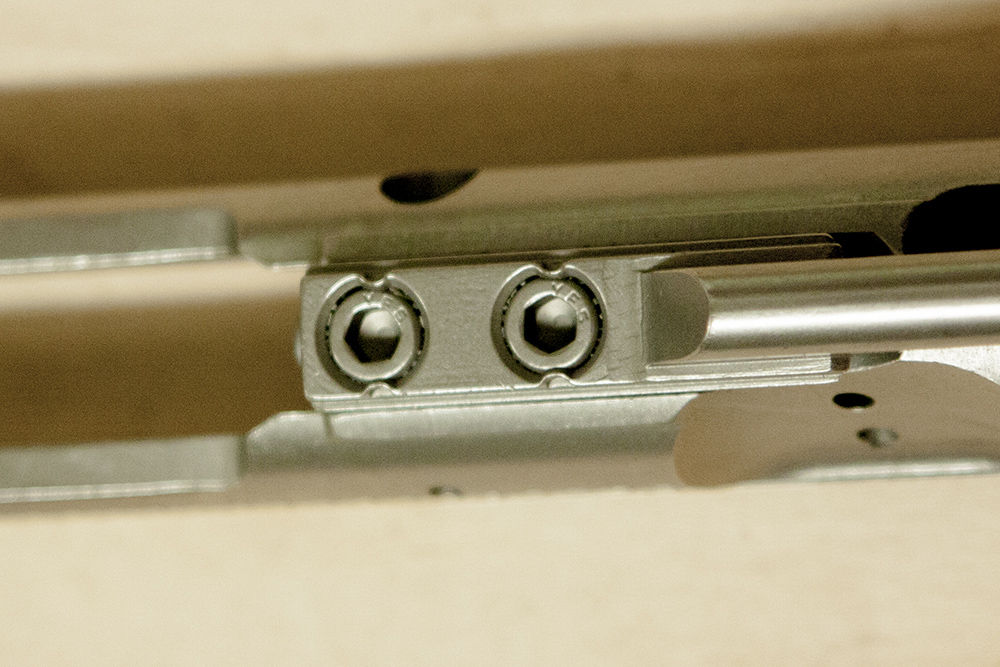 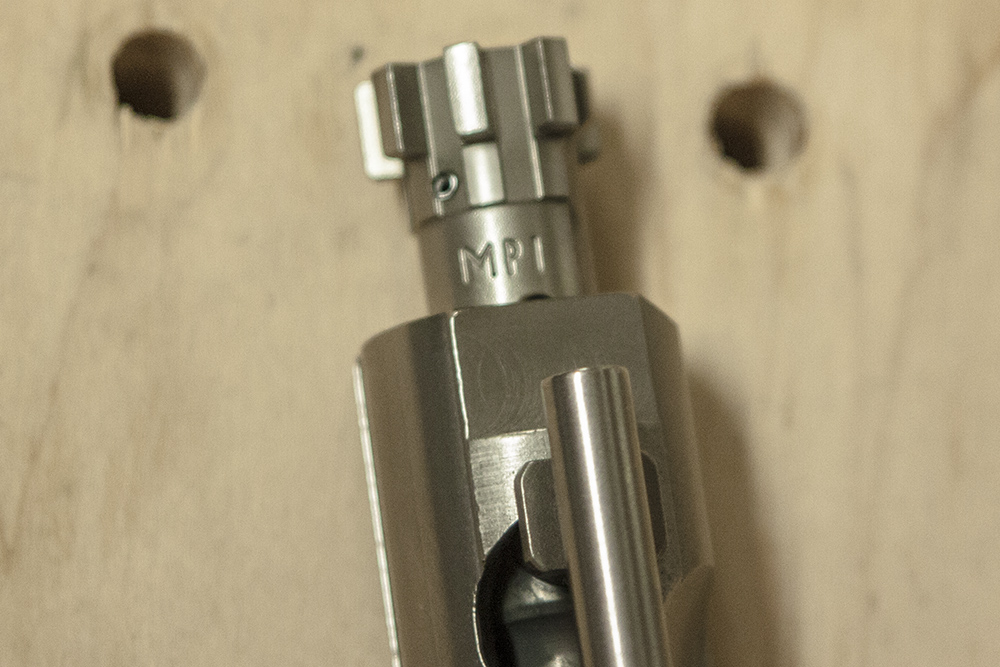 The only cons I can see at this point is that:

1) One finish area is not perfectly smooth. Unfortunately, it’s the one part you will see when the dust cover is open, too. However, it will not affect performance one iota. And just so you know, mine wasnt an accident: My friend ordered the same exact one and it had the same exact shaped mark in the same exact spot. It must be something in the machining/coating process. I only mention this because I want to make it known that it is not a flaw, but rather part of their process. For those who must have a magazine picture perfect looking AR-15 or they just wont be able to sleep at night…..maybe this BCG is not for you. Parkerized finishes cover most, if not all of the machining marks, but the NiB does no such thing. It may in fact accentuate it due to the shiny finish. So you can see the mark more clearly, I photoshopped this picture to enhance the squiggly “S” mark on the Carrier: 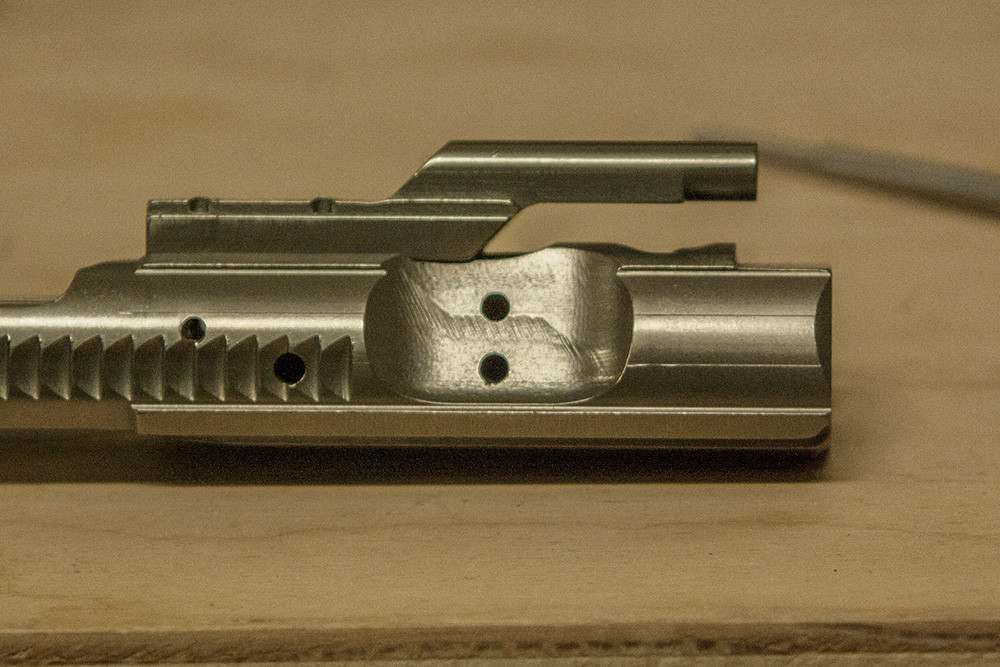 2) It does not have the HPT label….at least not to my knowledge. HPT is another spec that ensures that the bolt can handle the higher pressure ammo without failure. They intentionally test an above pressure spec ammunition cartridge, and if it fails, then obviously it is not used (it will break if it fails). While it is an additional spec that adds to the value and may give you peace of mind, it is not 100% necessary. In fact, often the bolts that are claimed to be HPT and MPI is not actually done on an individual basis. Rather, the manufacturers will spot check the bolts every so often. That means that you never know if your bolt was actually tested or not, making this “spec” completely useless (unless you happened to get one that was tested, which you can’t know). I’m sure there are a few others out there, but the one BCG I know that HPT’s and MPI’s every bolt is BCM. They do not, however, have an NiB-X option.

Moving on, I proceeded to put it into the upper receiver. For anybody who has racked back the charging handle on a new, dry BCG or dry new rifle, you know what it feels like: Gritty, rough, basically feels like you’re rubbing sand paper on sand paper. It takes a few hundred rounds and a good amount of lubrication to break the BCG/Upper Receiver in. In my case, I have a brand new, unfired Vltor MUR 1S upper receiver with a new Joebob NiB-X BCG. I couldn’t believe it, but it literally felt like it had already been broken in on the first charge. This tells me there is definitely a difference in the lubricity between a parkerized and a NiB coated BCG. Whether or not that makes a difference remains to be seen, but at the very least there is a difference that you can immediately feel.

Now as for how it performs, I feel my opinion on the matter is not solidified nor backed up by experience. Admittedly, I have only taken it out once and put few rounds through it, so take my experience with a grain of salt. However, I must note that it DID perform flawlessly. It shot very smoothly and felt like it was a bolt that had already been broken in. All brass extracted to the 2-3 o’clock position and that was without the black o-ring installed. Further, I actually did not lube it and only left the residual lube from the previous BCG that was inside the receiver. I suppose that helped a little, and being that there were few rounds put down the pipe that day, it wasnt enough to dry the BCG out to test how it functions dry. To be clear, I am not an advocate of firing a dry BCG and I definitely dont make a habit out of it. But I will likely do more testing of my own with it dry: I want to know that if the day ever came that I needed to fire my AR and I didnt have spare lube around,  it would continue to function and give me peace of mind that the next shot wont be my last due to lack of lubrication.

One quick thing I want to mention is that many people say the one thing the NiB coatings, and others like it, do are that they make it much easier to clean. I have found this to be true on all areas of the BCG except one spot: The back of the bolt. The picture below shows that even on an NiB coated bolt, there is still build up of carbon on the back of the bolt that will eventually need to be scraped off. I attempted to clean/wipe this off with just a rag and there was no way it was coming off with that alone. In other words, it wasn’t “wipeable”. What I usually do is take a razor or exact-o knife and scrape it off. I have done this with all my bolts and it seems to work the best…..this bolt, with NiB coating and all, was no exception. Once it has been loosened by the razor, take your carbon buildup cleaner of choice and wipe away and all is well. 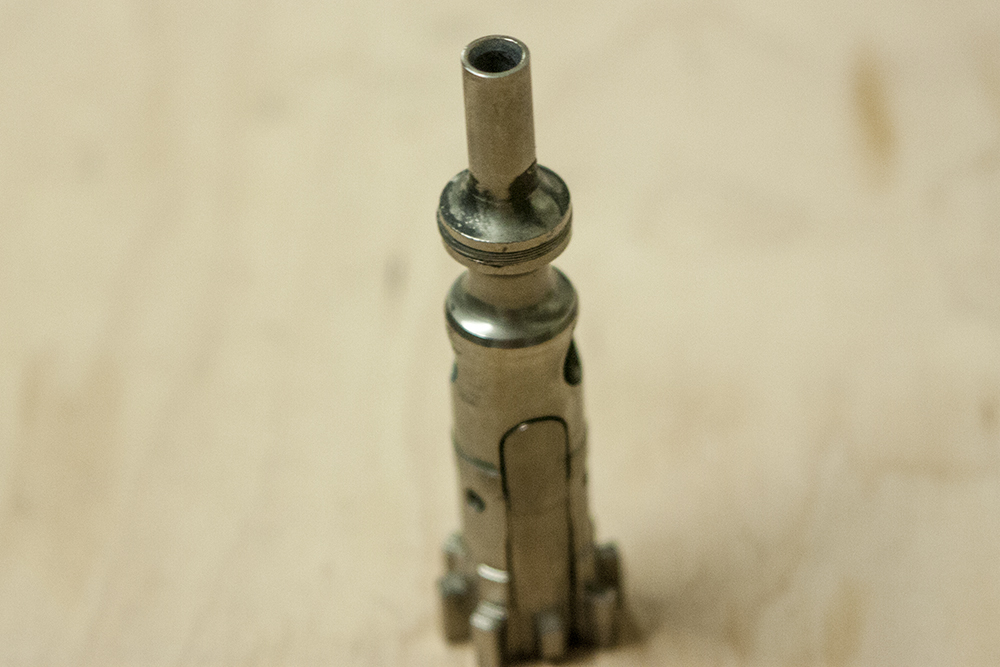 All in all, I cant quite yet give a full scale review until further testing, but my initial impressions and small firing test indicated that this is a very high quality BCG with good enhancements over the standard variety. As of right now, there are no indications that there are or will be issues, but only time will tell for sure. I believe that this Joebob Outfitters Enhanced BCG will provide additional performance of my AR-15….albeit maybe only a little bit, but every bit helps, right? 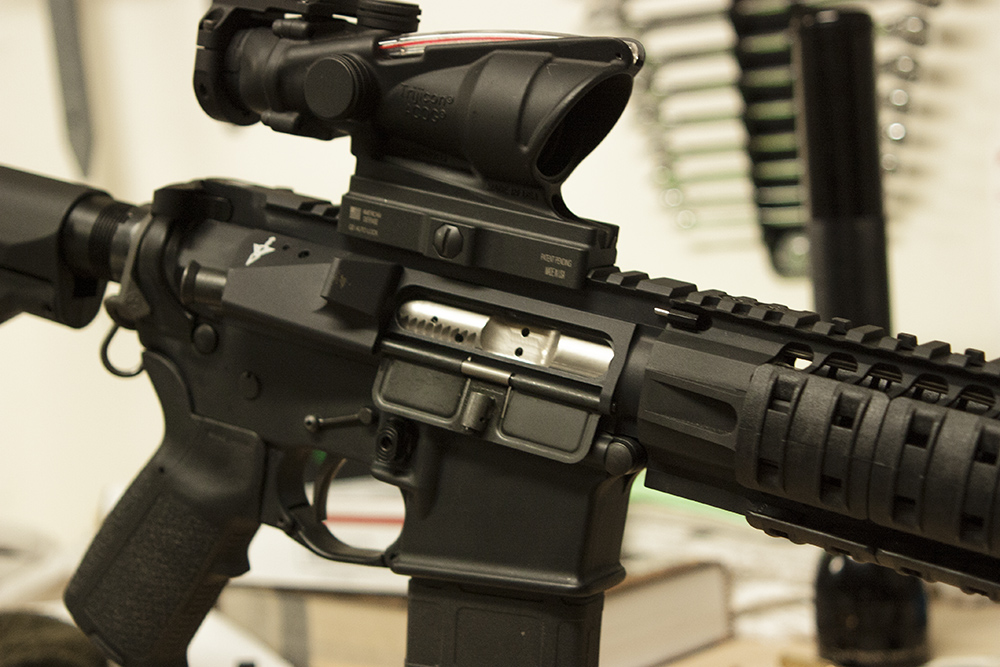 I have now fired many rounds through my rifle with this bolt. It has yet to fail me on any ammo tested, whether reload, commercial or milspec. It also does appear to keep running even once the oil has dried out. How long it will continue to run for without lubrication, I don’t know: I don’t have the funds to test the breaking point of my gear. But I do know this: If you’re in a pinch and don’t have any lube to squirt in there, it seems you have a better chance with a NiB coated BCG than a parkerized one. This BCG will surely stay in my rifle.