Arsenal Firearms is a pretty new company to the firearms scene. They are particularly known for their pistols and their flare for coming up with unique products and innovative designs, such as their 1911 styled (sort of) double barrel semi auto “Dueller Prismatic”. They are most known, however, for their most popular pistol, the Strike One. It is a contemporary style pistol that has very aggressively pointing geometry, much like a Glock, and an extremely low profile slide. This pistol’s main claim to fame is that there is no “feedramp”, which can be an Achilles heel for reliability in feeding. Furthermore, Arsenal claims the low profile slide creates a lower center of gravity, causing the pistol to have a lower perceived recoil, and more “straight back” vs muzzle rise. But do the claims hold water?

I only had a short time with the Strike One, so while I cannot be completely comprehensive, I feel I got enough time on it to form an opinion on it. 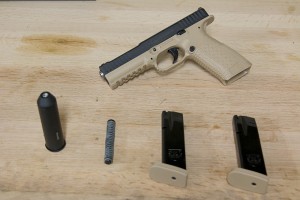 All functionality aside, most people either love or hate Glocks. Wait, Glock you say? Isn’t this about the Strike One? Yes indeed. I feel the Strike One points VERY much like a Glock. I am used to shooting a 1911 and an HK P30, which have similar pointing angles, and they are nothing like a Glock. They are not like Glocks in that the web in-between your index finger and your thumb feel as if they are pointing more forward towards the target….I call that “aggressively pointed geometry”. Some will say that this lends to less recoil and faster target re-acquisition. Whether you feel that this type of geometry is a good thing or a bad thing, I call it a preferential thing. My preference is obviously biased towards the 1911 pointing feel, because that’s what I’m used to. If you like Glocks, you will probably love the way the Strike One feels and points. The Strike One sits deep into the web of your hand. When I raise up the pistol very quickly, it naturally points above the target’s head due to the geometry. However, if you are used to a Glock feel, you would probably point the Strike One dead nuts on target, but you would probably take my 1911 or HK and naturally point it towards the target’s groin!

The Strike One is a staggered handgun, so it features a fairly wide grip. It is also a large framed pistol, and has a very long grip. The actual of the grip in my hands did not give me the “right at home” impression. It feels like I am holding a foreign object; it feels hard and straight. Not rough or sharp, but very bumpy (I guess?)….the serrations are not milled out but instead are extruded “3D” bumps (“3D” as Arsenal calls it). It’s definitely not something that was comfortable to me. If my hand was wet and cold, the grip would have lent to more pain than actual increased gripping capability. Likewise, sweat would have been just as slippery. The bumps on the side are much too big and too far apart. I feel that the grip was designs with gloves in mind.  Now the serrations on the front of the frame under the trigger guard were not in “bump” form and instead were wide lines and not nearly as deep….they helped my grip much more than the bumps on the sides. Overall, the grip is straight without too much contour to fit the hand: No width contour, no finger grooves, etc. There’s only a slight bend on the spine, which for my hands wasn’t really usable due to the pistol seating so deeply in the hand. I had over half an inch sticking out at the bottom. At the end of the day, I do not feel that enough thought was given to the ergonomics of the grip itself. I call Glocks, “Blocks”, for a reason, and feel that the ergos of this grip deserves the same designation, albeit with slightly rounder edges. This is 100% a preferential issue though, so I am sure there are many who feel I am out of line on this point.

Below is a picture stacking up my HK P30 9mm vs my Kimber Ultra CDP II vs the Strike One. All in all, they are pretty close in overall grip width. 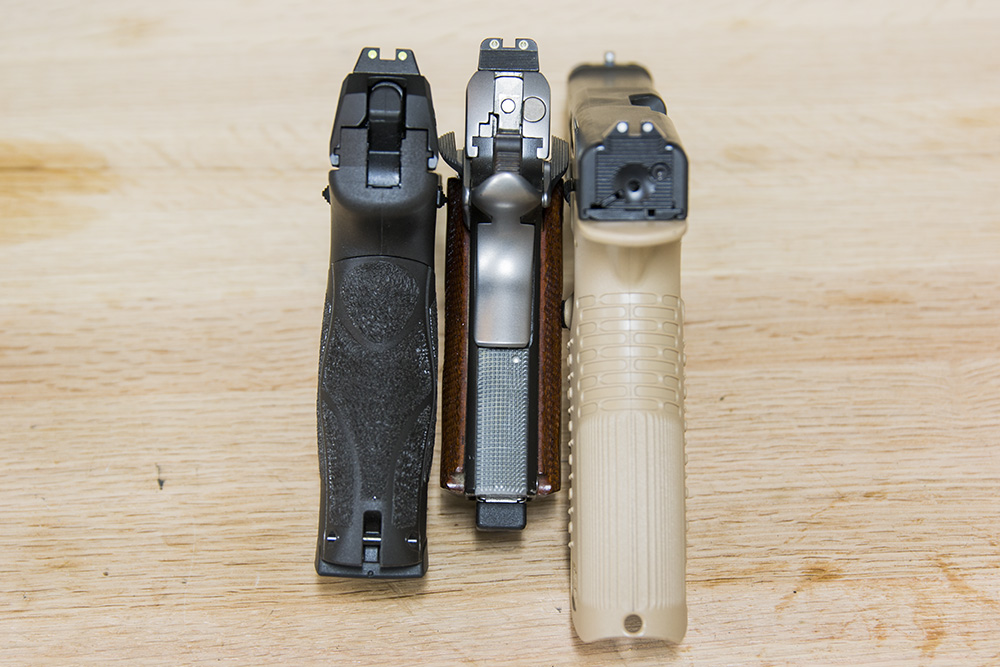 This pistol is heavy. Granted, it’s a full-size pistol, so you can’t expect a lightweight. While the frame appears to be of polymer construction, It’s still pretty meaty. I am okay with this though because I feel it lends to a better distribution of the weight….it’s not so muzzle heavy this way. The extra weight also helps tone down perceived recoil. My Kimber has an aluminum frame and a bull barrel and is much more front heavy.

This part is very bittersweet for me. Despite my lack of preference for the ergos, I was very hopeful that the Strike One would come through on the claimed performance. In certain ways, it absolutely did! But in other ways, it was absolutely abysmal. Let’s start with the good:

The claim that recoil was mitigated was, in my view, completely true. The lower profile slide means that the weight distribution is closer towards the center point, making recoil move straight back instead of up and down. I think this is because it is a combination of 4 things:

All of these things added together made it so this pistol had an extremely low recoil impulse with little muzzle rise. This allowed for faster and more accurate follow-up shots….a VERY good thing!

Accuracy was on par with the other pistols I had with me: HK P30 (9mm) and my Kimber Ultra CDP II. Basically, it was as accurate as I allowed it to be. The sights were right on point from the factory and needed no adjustment.

And that’s about where the good stuff ends. After my second magazine, the magazines would no longer stay seated and would drop after every shot. At first, I was thinking that I failed to seat it well enough. But when it happened again and again after every shot, I knew something was wrong. For the rest of the range trip and test, this is how the testing went:

(P.S. – Please excuse the flinch…..it was a long day 😉
When I got home, I further inspected what the issue could have been. I was using factory magazines, and it was happening with both of them at the same time. Nothing appeared out of the ordinary, and nothing appeared broken or worn. So I proceeded to take apart the latching mechanism for the magazine. It comes apart very easily: Simply push the magazine release through until it pops out. Then You’ll see through the mag release hole that a metal bar is sticking out…..that’s the magazine “leaf spring” and latch. Now you have to look through the mag well and you’ll see that metal bar that is sticking out is actually the magazine mechanism that is supposed to hold the magazine in place. Simply push that upwards towards the chamber and the whole thing slides out. This is what it looks like when it’s out: 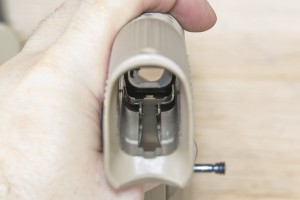 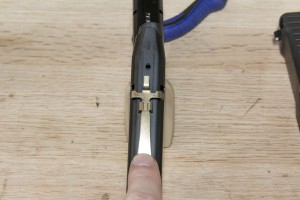 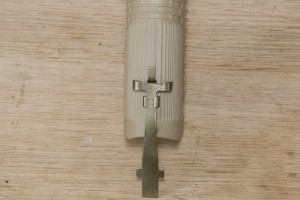 This is the only thing holding the mag in place: A one-piece metal retainer that has two sharp teeth than engage with the cutouts on the magazine. The problem as it appears to me is that the teeth and mag cutouts are not properly cut or shaped. The teeth are basically not wide enough to keep the magazine from disengaging. Furthermore, the angle that the teeth engage the magazine are at a downward angle and can easily slip off the cutouts.

I tried to re-bend the teeth into a position that would hold the magazine, but to no avail. Even racking the slide and letting it fall home would often drop the magazine. I am going to have to send the pistol back in and have it worked on. This is pretty disappointing given the price point of this pistol. Unfortunately, I could not complete the rest of the tests I had, such as ammo type and reliability. Every single shot I ran after the failure point did manage to extract with no stove pipes, but I could only test the feeding via manually racking the slide, which is not a true feeding test.

For obvious reasons with the magazine release reliability, I cannot recommend the Strike One pistol yet. From my research, it appears to be a limited early run that made it through the factory that QC didn’t catch. I am hoping to find that Arsenal Firearms will be responsive and quick to fix the problem…..time will tell.

What I can say is that it is pretty cool shooting a pistol that has very little recoil. It is also more accurate than I am, but at the end of the day I need a reliable pistol. Geometry and ergonomics are a personal preference and can be overcome with training, but reliability is a must and I simply don’t trust the current mag release design. With all the Strike Ones in circulation at this point, I would think that this would be a common issue if it was truly a design issue, but I’ve only seen a few people online with this issue. I have to think I am one of the “lucky” ones to get a lemon. Like any manufacturer, you cannot get a “100%”, 100% of the time…..that’s just not realistic. So until I get this issue cleared up, I have to put a hold on the outcome of this review. I will update it when it gets resolved and can get some more trigger time.

2 Comments on Strike One – Arsenal Firearms