This review is only going to be a short one because there’s really not too terribly much to report on. I’ve been using the Lyman 1000 XP scale for about 5 years now. My particular version looks a little bit different than the newer models, having a smaller LCD screen and a brass weight for zeroing. It is now apparently discontinued. It features 12v power (standard 110v plug) or the use of a 9volt battery. The Lyman 1000 XP scale displays weight measurements in either grams or grains with the switch of a button and weighs to the tenth of a grain (0.1) or the thousandths of a gram (0.001). 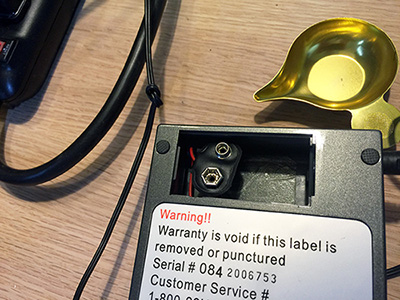 .
Here’s what I can say about this unit: It measures weights up to 1000 grains. And unfortunately, that’s about the only “positive” thing I can say about this unit. There’s plenty of negative, however. First off, carefully assess what I just said the positive was…..it measures up to 1000 grains. What I DIDNT say is that it measures up to 1000 grains ACCURATELY. Because it doesnt! Depending on how long the Lyman 1000 XP has been turned on, how acclimated it is to the surrounding temperature, when the last time it was zeroed….all of these things affect the final measured weight (unintentionally by Lyman, of course). I have gotten to a point where I know how to use it and get it very close and know when it’s off, but should I have to? I’m still having to guess some. Within the first 10 minutes of use, I must “weight surf” at least 10 times before it begins to steady. What I mean by that is that I have to lightly press on the scale sensor and re-zero it a few times using the 20 gram weight. Then I’ll test out a few loads and see how it goes. Every few loads, I’ll take off the powder hopper and check the zero and if it is the same, I know my loads are consistent. If it’s off from what it normally is at when zeroed, then I will re-weigh my loads after zeroing again. Before I start reloading, what I’ll do is plug it in and turn it on…..I’ll leave it on for a few hours and let it acclimate to the current surrounding conditions (heat). By the time I come back, it’s not moving a whole lot at this point and might only fluctuate 0.2-0.4 grains.

Are you starting to see the pattern of use for the Lyman 1000 XP Scale? It does not do a good job of staying consistent. I will add a caveat to this: Most of the loads I am working up with this scale are for super accurate, match quality, bolt action type use. Much of this wouldn’t matter if its just going to be for blasting a semi auto out in the desert…..but in that case, you probably aren’t using a scale like this to reload bulk ammo and instead are using a powder drop! So really, this scale doesn’t do much good to anyone!

In the end, there’s probably a good reason why Lyman has come out with 5 new products and discontinued this one. From the reviews on MidwayUSA, it appears that Lyman has stepped up their game and are putting better quality products out. At any rate, if you’re looking for a reloading scale and come across a Lyman 1000 XP, just do yourself a favor and pass it up. Just as a verification to my story on this product, my friend has the same exact scale and he has had more problems that I have in accurate measuring.

Best of luck, my friends!